Javis.jl is a general purpose animation library which builds on top of the Luxor.jl graphics library.
It fills a gap in the Julia ecosystem by providing functionality to create object based animations to communicate complex ideas through simple means. Furthermore, Javis provides the flexibility for users to extend Javis’s visualizations to a variety of applications. Users are already expressing complicated ideas through winsome domain specific visuals such as planetary motion or brain mapping.

Javis.jl is a general purpose library for creating Julia-based animations and visualizations across domains. At its core, Javis builds on the high level graphics library Luxor.jl and FFMPEG.jl for animation creation. Individuals who have difficulty effectively communicating ideas or findings statically, can easily use and extend Javis to construct informative, performant, and winsome animated graphics.

In this talk the audience will learn the key concepts of Javis by having a look into the abstraction system we use. Additionally they will see basic examples on how objects can interact to create powerful animations. A main point will be the interoperability with existing Julia packages like Luxor.jl and Animations.jl that we use to make the easiest experience for the user who already knows how to use Luxor for static art. Finally, the audience will come away with how Javis is already being used, what the future of Javis is, and how to get involved with the project.

Javis is inspired by the Python-based animation engine, manim, created by Grant Sanderson (aka 3blue1brown) to visualize math concepts. Although inspired by manim, Javis has the greater goal of providing a general purpose animated graphics library. Historically, the Julia ecosystem has lacked a similar dedicated toolchain for the easy creation of complex animations. Javis is now filling that gap in the ecosystem - and beyond only mathematics.

After reviewing the Julia ecosystem, the most similar packages to Javis are Reel.jl, Makie.jl, and Animations.jl. Javis differentiates itself from these packages by enabling its users to create visuals that may not be generally - or easily - supported by standard plotting packages. Although Javis uses a "Frame" concept similar to Reel.jl and Makie.jl, it is not only limited to plots and can create much more complicated visualizations than Animations.jl. Moreover, Javis has extensive documentation and tutorials to illustrate how to easily get started which is at times lacking within these similar packages. Finally, Javis has an active 40+ developer community where beginners can ask questions and participate in the open development path of Javis. Given that Javis users will not be limited by plotting conventions and having guidance in the form of high-quality tutorials and extensive documentation, the novelty and accessibility of Javis in the Julia space is high.

Already, Javis has seen steady adoption by users. For example, Javis has been used in secondary school settings to teach on topics such as physics and earth sciences. Increasingly, Javis is also being used for advanced visualizations. Further applications of Javis are in domain specific applications such as visualizing fourier series for signal processing use cases and mapping activity across the brain to view how the brain behaves under stress.

Due to the extensible nature of Javis, Javis is poised to leverage the existing Julia ecosystem for further animations that users can take advantage of using. This integrative tooling comes as a result of a very open definition of how Javis defines an animation. This tooling enables a user to hook into packages, such as Animations.jl or Pluto.jl, to provide additional capabilities for fine-grained controls of animations, as in the case of Animations.jl, or reproducible development environments per Pluto.jl. 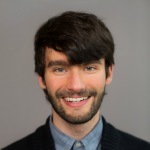 My Name Is Jacob S. Zelko – Pleasure To Meet You!

I am a graduate of Georgia Institute of Technology with a BS in biomedical engineering. While pursuing my BS, I worked as a data information specialist and biomedical informaticist in the Department of Biomedical Informatics at Emory University doing research in the areas of computational psychiatry and worked with The Center for Discovery as an engineering consultant to aid in caring for their juvenile neurocognitively diverse population. Currently, I work as a Health Data Analytics and Informatics Researcher at Georgia Tech Research Institute and as a Consultant with the Centers for Disease Control.

I'm a master student in computer science in Heidelberg, Germany. I like to teach and blog about programming especially about Julia.