Unite Maps, a program led by the United Nations Global Service Center, is leveraging OpenStreetMap data to deliver geoservices and cartographic products to UN Peacekeeping missions in Africa. The initiative supports peacekeepers in their operational efforts (as navigation and security) in areas torn by conflict. Unite Maps contributes to the extraction of OSM data as well as community support and capacity building of OSM communities under the umbrella of the UN Mappers network.

Unite Maps is a mapping initiative that aims to assist UN Peacekeeping missions in their field endeavors, such as peace and security, navigation and logistics, by providing its peacekeepers with topographic maps that will help them in their tactical and operational activities.
Through this initiative, the Department of Operational Support (DOS) of the United Nations helps countries torn by conflict to create the necessary conditions for lasting peace.

Building upon previous initiatives in which the main objective was the production of topographic maps, the United Nations Global Service Centre (UNGSC), the United Nations Geospatial Information Section in New York, and three peacekeeping missions - UNSOS, MONUSCO and MINUSCA - established in August 2019 the foundation of this new and wider global initiative.

Within this framework, UN personnel on the field is requesting the editing of specific areas of interest on OpenStreetMap. Even non GIS professionals are enabled to produce cartographic products as topographic, urban and site maps directly from the Maps On Demand (MOD) application. These products use OpenStreetMap baseline data mixed with UN authoritative data for sensible features.

Unite Maps provides OSM data as an organised editing activity and we inform, contact and collaborate with the local communities living and editing in the areas where we map too. When possible and approved by the overall OSM community, Unite Maps organizes imports of data from UN Peacekeeping missions internal databases. Unite Maps contributes to OSM data extraction both editing with an internal mapping facility and crowdsourcing with a network of mappers, the UN Mappers.

UN Mappers is a thriving community ranging from UN personnel on the field (GIS groups, UN offices, military and police) to academia (highschools and universities), from local communities and NGOs to any remote volunteer in the world.

The crowdsourcing team is organising collaborative editing events, trainings and mapping parties, as well as working on the production of educational material on OSM in different languages, delivered publicly through the Unite Maps Learning Hub. It also constantly interacts with local communities, by doing capacity building and helping in growing their community basis and outreach. 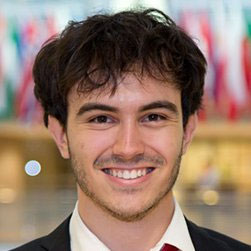 Michael Montani has a Master of Science in Geoinformatics Engineering at Politecnico di Milano. He works as Geographic Information Systems Consultant at the United Nations Global Service Center (UNGSC), where he is the coordinator of the crowdsourcing activities of Unite Maps.

Formerly he has been co-founder of PoliMappers, the first European YouthMappers chapter, and YouthMappers Research Fellow, for which he conducted a research project in Senegal to fight schistosomiasis with OpenStreetMap data.
He is an active contributor to the map and OSM communities in Africa since 2016.

In the last years, with UN Mappers we delivered trainings to different local communities in African countries like Somalia, Mali, Uganda, Cameroon, Mauritania.